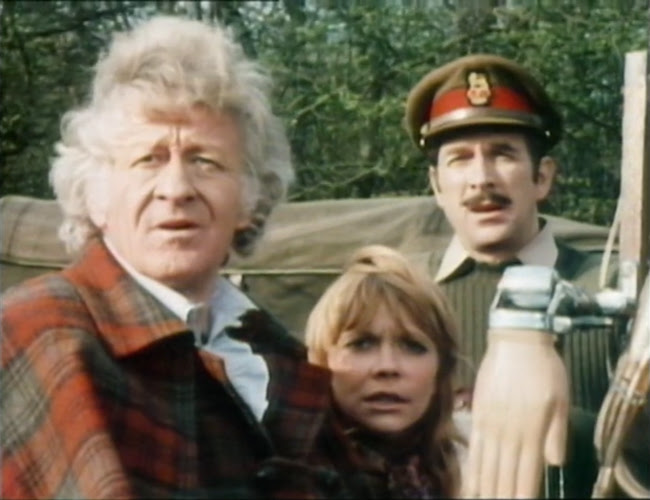 To-day's Jon Pertwee's birthday so I thought I'd revisit my favourite Third Doctor serial, The Time Monster. Serialised in six parts in 1972, it served as the finale for Pertwee's third season on Doctor Who. For me, it has it all--comedy and horror, time travel shenanigans, the Doctor's strident weirdness played against the Brigadier's long suffering incredulity, and one of Jo Grant's more impressively flamboyant costumes. All this and Ingrid Pitt, too. 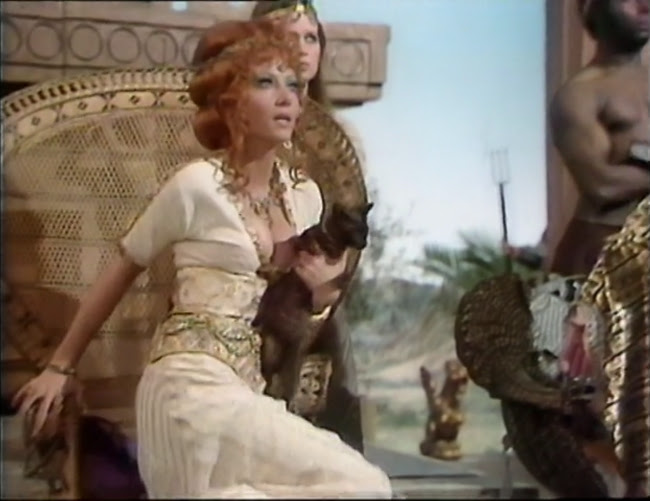 One of my all time favourite actresses, Pitt also appeared in a Fifth Doctor serial but she's so much better here as Queen Galleia of Atlantis. Though she doesn't show up until the fifth part of the six part serial when she and the Master (Roger Delgado) have a power play romance that seems like it could've filled a full serial. 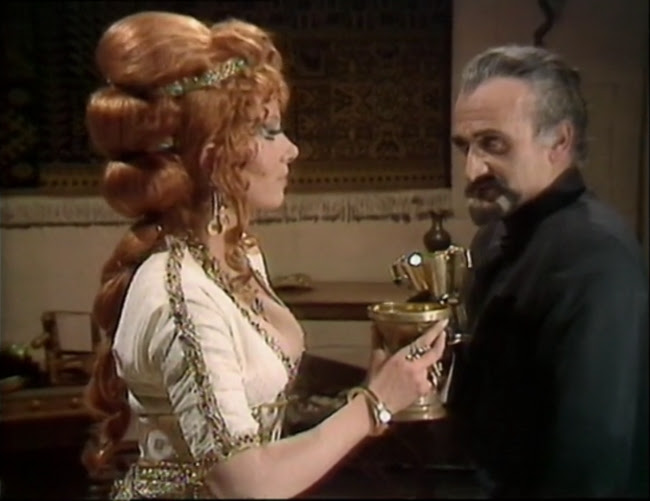 She and Pertwee don't share any dialogue (if you'd like to see them working together, check out the entertaining Amicus anthology horror film The House that Dripped Blood) but she has a nice moment with "Jo Jo Grant". 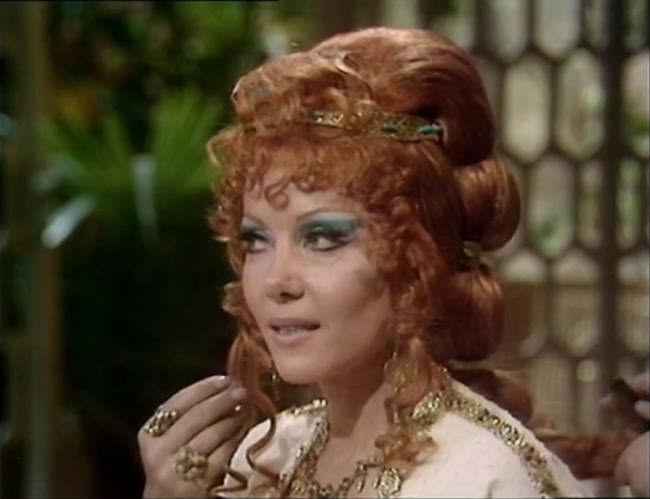 "It's just Jo," says Jo, finally correcting an error made by the King (George Cormack) when the Doctor introduced her as "Jo--Jo Grant". She receives a wig and dress in Atlantis which are, in her own word, "Groovy", though she has to trade in the improbably badass boots she'd been wearing for most of the serial. 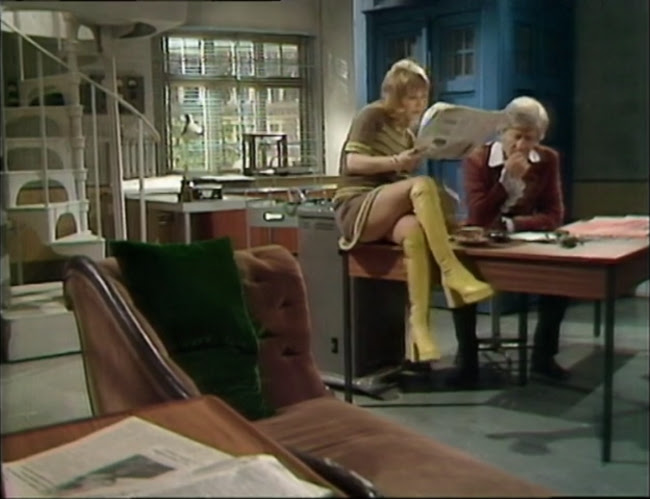 Jo is arguably the Doctor's meekest companion--possibly a choice by Katy Manning since she now also plays the bold adventuress Iris Wildthyme in the audios. She's good as Wildthyme, and just about unrecognisable. All of Jo's self-assertion seems to be in her wardrobe and she seems eager to strike a pose to emphasise it. 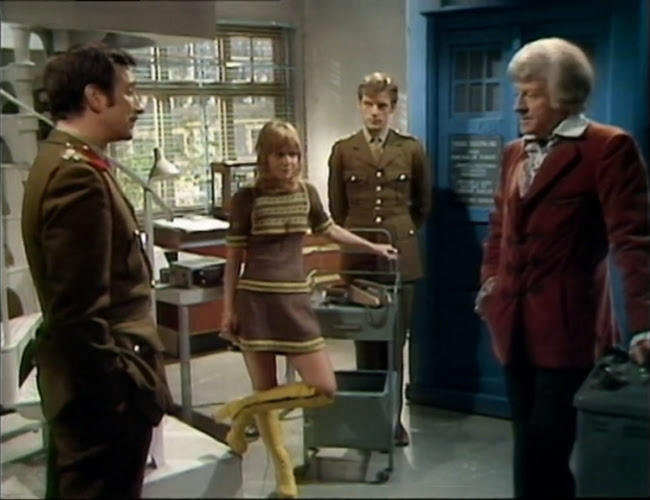 Pertwee was a very pose-y actor, too, though he did it less and less towards the end of his tenure. But I like how he fits himself into a little chair in this episode when he explains to a young man, Stuart (Ian Collier), he's not sure if he knows how to reverse his accelerated ageing. 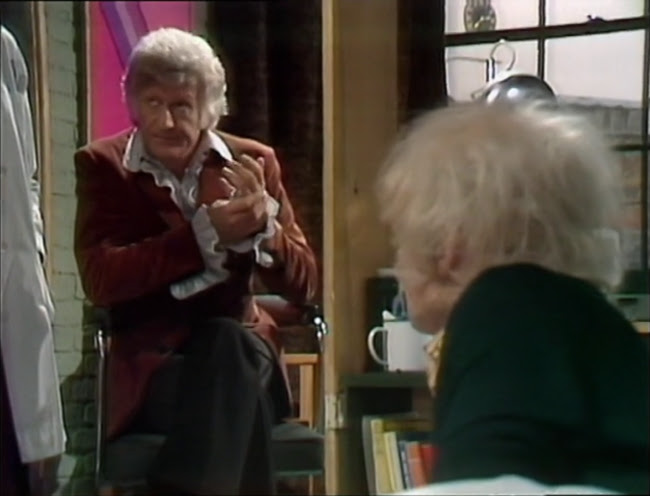 Stuart is an assistant in a lab run by the Master--posing as a Greek physicist--and a young woman named Ruth Ingram (Wanda Moore). Stuart and Ruth have a lot of coy banter about Women's Lib, a frequently recurring topic during the Third Doctor era. During an intriguing sequence where the Doctor becomes dispersed in the Time Vortex, he communicates with Jo in the TARDIS telepathically and we can hear a number of whispering voices chattering. The Doctor says these voices are his subconscious--one of them is a woman's voice. Jodie Whittaker in embryo? 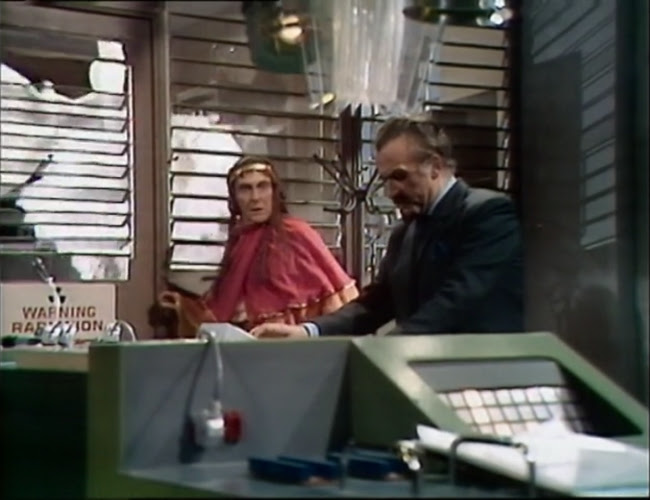 I guess a lot of people can't get past the low budget special effects but I find a lot of the weird stuff in this serial very effective, even when it's a man in a white bird costume swinging from a wire. I love the cliffhanger in the second episode where the Master transports the Atlantian priest and we see this great panicked look on the face of the administrator, Dr. Percival (Johm Wyse), just visible through a sort of sun ray effect before the end credits. 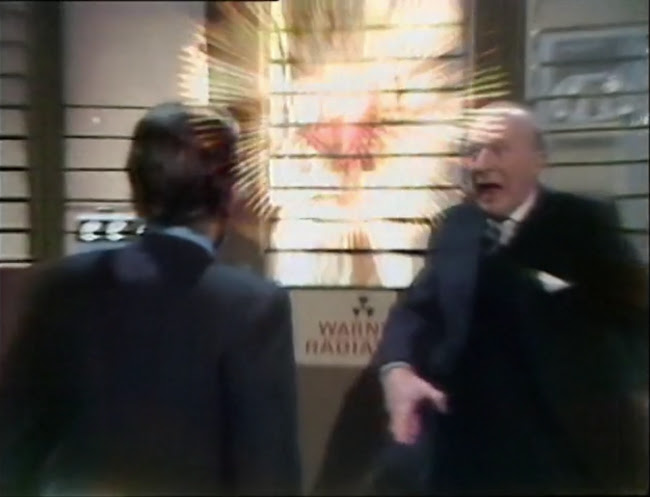 I also love the simple gadget the Doctor rigs up with forks and a wine bottle that somehow interferes with the Master's plan. Pertwee was primarily known for comedy before Doctor Who, which makes it surprising his Doctor is probably the least comedic of all. One of the things this serial is best known for is the Doctor and Jo locked in an Atlantean prison and, to quiet her fears, he tells her a story that, like writer Robert Sloman's later serial, The Planet of the Spiders, seems to be influenced by Buddhist philosophy. It's an effective moment and Pertwee sells the authority and tenderness required to make Jo and us contemplate the "daisy-est daisy" and the nature of despair to constrict one's worldview, making things seem worse than they are. 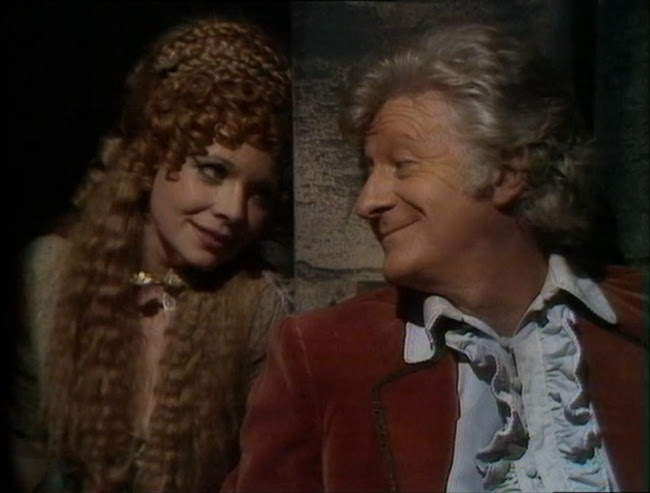 The sequences in the Atlantean labyrinth are also great and have a nice old pulp adventure quality to them. I love the slight sense of awe when the Doctor and Jo finally find the crystal. 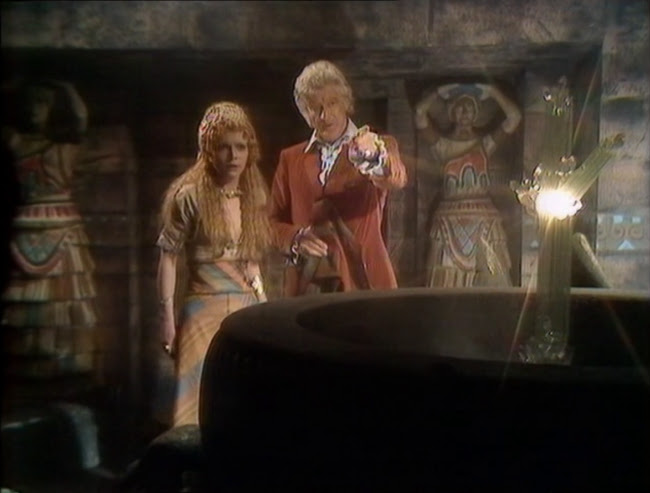 And I haven't even mentioned the Minotaur played by David Prowse. This serial really does have everything.