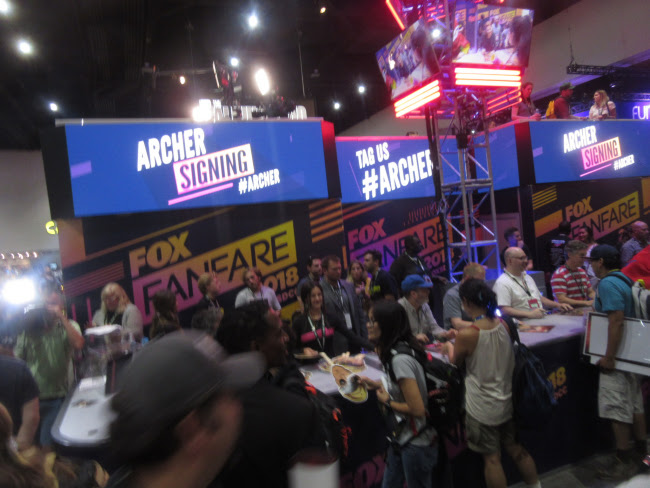 There's always more going on at Comic Con than any one person can cover. In addition to the many panels and signings, there are also booths selling collectables and booths for artists selling their work. There are metal workers and as always lots of steam punk leather workers, and of course there are comic book artists and authors. In the small press section, I tend to see creators pop up one year, enthusiastic and hoping to be noticed, only to never be seen again in subsequent years. One of the few small press series I've seen multiple years at the con is The Boston Metaphysical Society. I spoke to writer/creator Madeleine Holly-Rosing and told her how much I enjoyed reading the comic a couple years earlier. She showed me a bit of a newer issue and it looks like the art has improved quite a bit.

It was Sunday when I made the rounds of the small press area and I didn't have enough cash on me to buy anything. I got a few courteous but disappointed looks when I said as much. I would have liked to have bought an issue of Forbidden Futures--I spoke to one of its artists and was impressed by his nightmarish style.

I also spoke to an artist named Sheeba Maya who was selling a series of really gorgeous portraits based on the signs of the Zodiac.

Well, I think that's about all I have of interest to say about this year's Con. I kind of like that there was nothing in Hall H that drew much of a crowd this year. Since the Con still sold out I guess it means that the crowds were more evenly dispersed about the place. As companies like Disney seem more and more to favour their own Cons for making big announcements, I wonder if we're seeing the beginning of Comic Con's growth finally stopping and maybe even receding. That could be a good thing if it draws more attention to independent creators though I'm not sure there many sites left willing to cover things they're not getting paid to cover.

Posted by Setsuled at 7:28 AM
Email ThisBlogThis!Share to TwitterShare to FacebookShare to Pinterest
Labels: comic con, san diego comic con