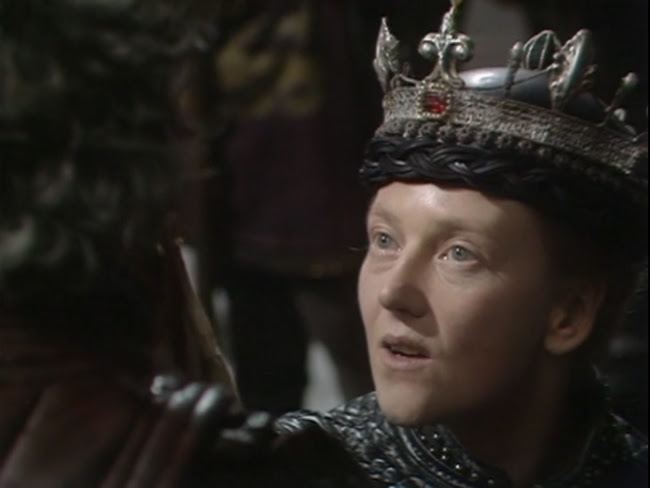 The third part of Shakespeare's Henry VI plays is not the final part--the story concludes in Richard III. That Richard, son of the Duke of York, becomes one of the central figures in Henry VI Part 3. The other most prominent figure is Queen Margaret and in the War of the Roses, at this point in Shakespeare's depiction of the conflict, she and Richard could be seen as the most effective and focused actors on either side from among the many other ruthless and ambitious players. Richard and Margaret are also physically different from all of the major players and these differences inspire commentary within the play--Richard because he's a hunchback and Margaret because she's a woman. I watched the excellent 1983 production directed by Jane Howell last night which carries over the cast from her productions of the previous two parts. 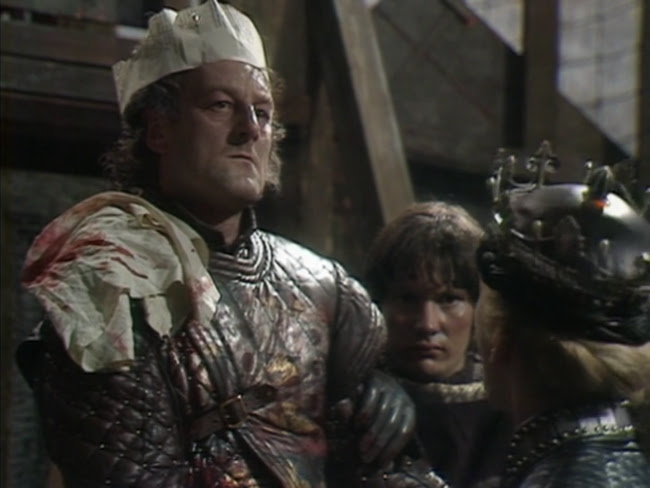 "Women are soft, mild, pitiful and flexible; Thou stern, obdurate, flinty, rough, remorseless," says York (Bernard Hill) to his captor, Queen Margaret (Julia Foster). I wonder how he arrived at that opinion about women--his description doesn't fit any woman in all three parts of Henry VI--not Gloucester's scheming wife in Part 2, certainly not Joan of Arc in Part 1. Margaret, who began as a sweet young lady in Part 1, became a shameless schemer and adulteress in Part 2, and graduates to bloody warlord (warlady?) in Part 3. York might be forgiven for any obtuse or foolish words he speaks considering Margaret has just mocked him with the handkerchief made red with the blood of his murdered twelve year old son.

O tiger's heart wrapt in a woman's hide!
How couldst thou drain the life-blood of the child,
To bid the father wipe his eyes withal,
And yet be seen to bear a woman's face?

It was hard for me not to think of Hill's performance as King Theoden in Peter Jackson's Lord of the Rings films and his line about how no parent should have to bury their child. York has committed his own fair share of murders but, as Northumberland, Margaret's ally, remarks on witnessing the scene, "Had he been slaughter-man to all my kin, I should not for my life but weep with him. To see how inly sorrow gripes his soul." 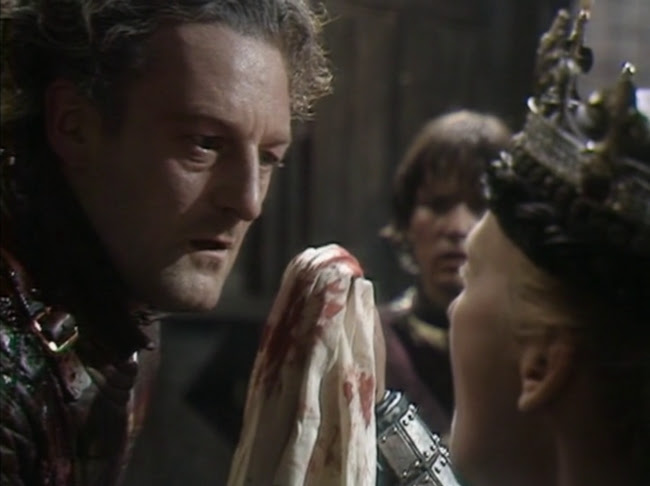 And this is a tribute to Margaret as a character, that her cruelty has such a presence in the imagination that it can rival Richard's. Julia Foster infuses the lines with a luxuriating sadism, her most impressive moment until the play's climax when she is giving her own nightmare version of the Saint Crispin's Day speech to the Lancastrian forces on their last legs.

Great lords, wise men ne'er sit and wail their loss,
But cheerly seek how to redress their harms.
What though the mast be now blown overboard,
The cable broke, the holding-anchor lost,
And half our sailors swallow'd in the flood?
Yet lives our pilot still. Is't meet that he
Should leave the helm and like a fearful lad
With tearful eyes add water to the sea
And give more strength to that which hath too much,
Whiles, in his moan, the ship splits on the rock,
Which industry and courage might have saved?
Ah, what a shame! ah, what a fault were this!
Say Warwick was our anchor; what of that?
And Montague our topmost; what of him?
Our slaughter'd friends the tackles; what of these?
Why, is not Oxford here another anchor?
And Somerset another goodly mast?
The friends of France our shrouds and tacklings?
And, though unskilful, why not Ned and I
For once allow'd the skilful pilot's charge?
We will not from the helm to sit and weep,
But keep our course, though the rough wind say no,
From shelves and rocks that threaten us with wreck.
As good to chide the waves as speak them fair.
And what is Edward but ruthless sea?
What Clarence but a quicksand of deceit?
And Richard but a ragged fatal rock?
All these the enemies to our poor bark.
Say you can swim; alas, 'tis but a while!
Tread on the sand; why, there you quickly sink:
Bestride the rock; the tide will wash you off,
Or else you famish; that's a threefold death.
This speak I, lords, to let you understand,
If case some one of you would fly from us,
That there's no hoped-for mercy with the brothers
More than with ruthless waves, with sands and rocks.
Why, courage then! what cannot be avoided
'Twere childish weakness to lament or fear. 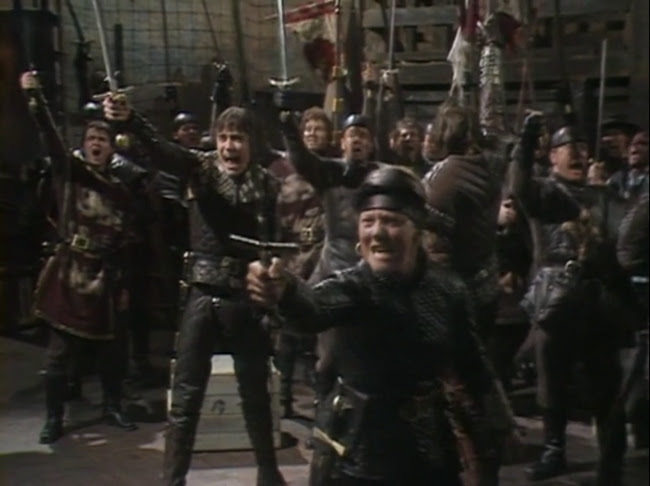 Foster gives a dramatic pause before "ragged fatal rock", emphasising Margaret's perception of Richard as something extraordinarily dangerous. In a play where so much of the drama comes from family loyalties and betrayals, Richard famously views himself as isolated. 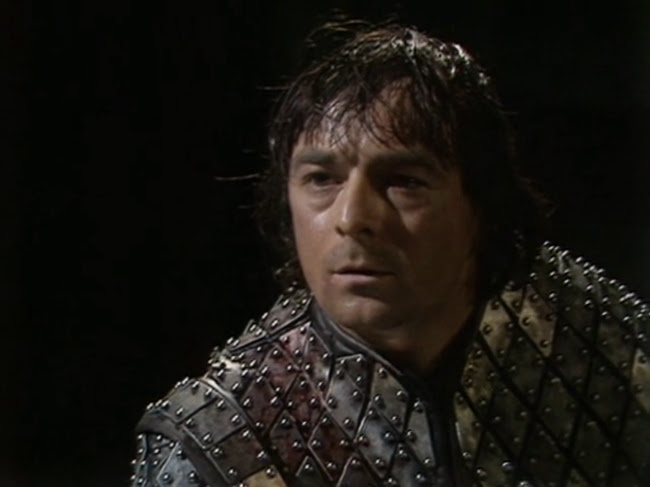 Then, since the heavens have shaped my body so,
Let hell make crook'd my mind to answer it.
I have no brother, I am like no brother;
And this word 'love,' which graybeards call divine,
Be resident in men like one another
And not in me: I am myself alone.

Richard will repeat these sentiments about himself being by nature not created for human affections in Richard III. Henry VI adds a lot of dimension to the later play not only in terms of Richard himself but in terms of the other characters, particularly Richard's eldest brother, King Edward (Brian Protheroe). Henry VI Part 3 shows him to be an unsavoury character, too, but without all the qualities that make Richard fascinating. 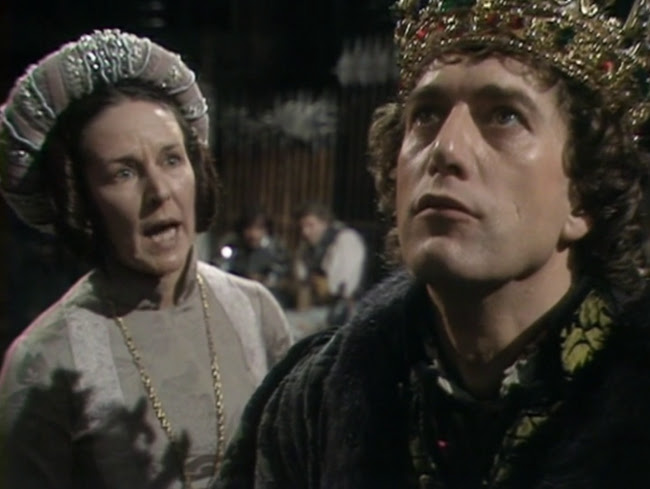 In another scene that provides a commentary on gender dynamics, Richard and Clarence (Paul Jesson) watch as the recently crowned Edward tries to woo a widow, Elizabeth Grey (Rowena Cooper). The scene is a fascinating contrast to the one where Richard woos the widow Anne Neville in Richard III. Where Richard accomplishes his seduction with cunning emotional manipulation, Edward shows himself to be a much poorer negotiator.

To tell thee plain, I aim to lie with thee.

To tell you plain, I had rather lie in prison.

Why, then thou shalt not have thy husband's lands.

Why, then mine honesty shall be my dower;
For by that loss I will not purchase them.

Brian Protheroe takes pains to come off as absolutely revolting in this scene, rolling his head and eyes like some kind of giant toad with unconcealed lust while Rowena Cooper as Grey stands firm, an apparent paragon of virtue, though it's likely she was motivated by ambition, too. It's not until Edward makes her his Queen that he finally gets what he wants. He loses what Richard essentially gains at the conclusion of his wooing scene. More than that, Edward loses one of his most valuable allies, Warwick (Mark Wing-Davey), when the nobleman is embarrassed by the news of Edward's marriage in the middle of Warwick trying to negotiate with the King of France for an alliance based on a marriage between Edward and the French Princess. Of course, this is a lot like how Henry ended up marrying Margaret in Part 1. 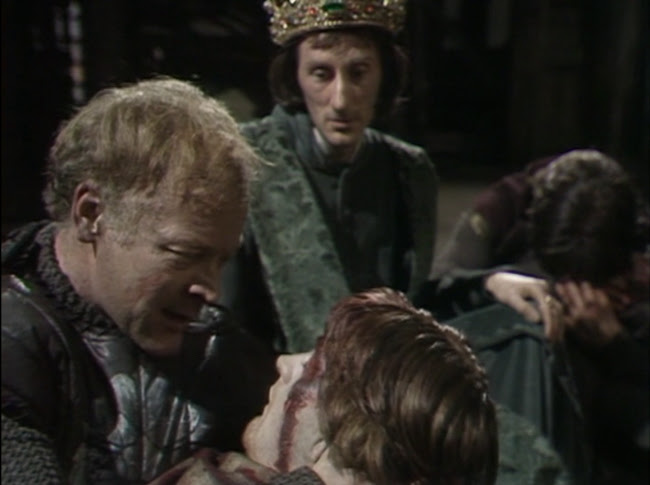 Yes, Henry himself (Peter Benson) is still around in his own play, drifting and placid as usual, most of his decisions having to do with abdicating power. He throws away his son's inheritance at the beginning of the third play; when faced with the choice to make Warwick or Clarence Lord Protector so Henry doesn't have to make decisions, he can't even make a decision on that and makes them both Lord Protector. And yet, Howell's production finds some worth in Henry in his desire to abstain from worldly involvement. The terrific scene where fathers and sons from both sides of the conflict lament over accidentally killing their relation, sitting on either side of the contemplative Henry, is presented appropriately as dreamlike. It's the horror of any Civil War where members of the same family are forced to slaughter each other and Henry, though a very different character from Falstaff, presents us with something of that more famous character's challenging question to the audience. Is Henry at fault for not wanting to participate, or is he the only sane man in the world?

A leading sprite deposits souls at court.
A bridle kept the flanks in moving check.
Contented eyes behold a flick'ring sort.
A hasty tack displaced them on the deck.
A bourbon gel has changed the footage hue.
There was a shadow sweat across the course.
The willows hid the mutely staring clue.
The bottle label tells its fact'ry source.
The wooden rain was frozen switched to up.
As earthly blinding bars suspend the light.
The whiskey ocean swells above the cup.
For caution's bells the storm commutes the sight.
A murder cry became a standard tease.
A world of cellophane constricts the seas.