The Divine Light and the Beast 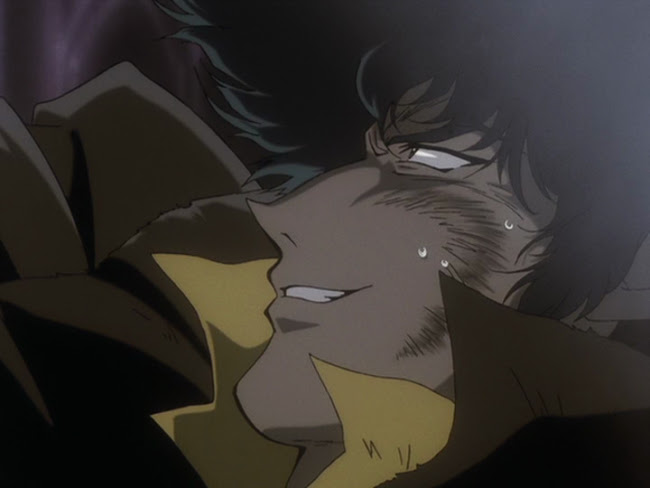 Some would say the fifth episode is where the story really begins on Cowboy Bebop. We finally start to learn a bit about Spike's backstory and get some possible insight into his lifestyle choices. But it's telling that this episode is such a stylistic departure from the rest of the series and it subtly asks us to contemplate what the "real" story is. When confronting his past, Spike says, "I'm only watching a dream I never awakened from." 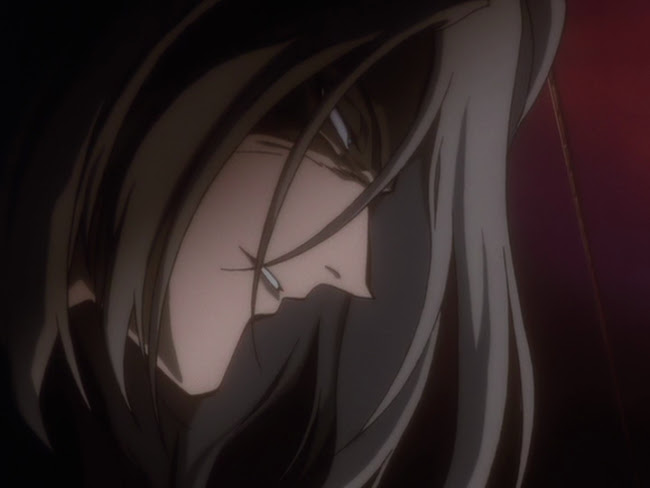 "Angels that are forced from Heaven have to become Demons," says Vicious (Norio Wakamoto). Maybe his name is a reference to Sid Vicious but he'd be more likely to prefer the Frank Sinatra version of "My Way". A gangster, Vicious belongs to one of the criminal syndicates who pull strings throughout the system. And he's apparently Spike's arch enemy but even now we only get hints as to why. 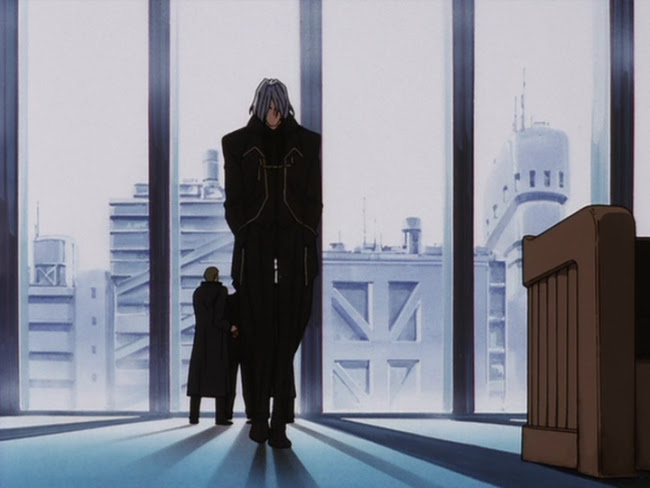 The syndicates stand in contrast to everything we've been introduced to in the first four episodes. Instead of being a mish-mash of cultural, racial, and sexual data, configured by natural progression into new forms, the syndicate is very like yakuza, dedicated to tradition. Even the visual design for Vicious is more like a traditional anime character than anyone else on the show. Many people say he resembles Sephiroth from Final Fantasy VII. Like Sephiroth, he also wields a sword. 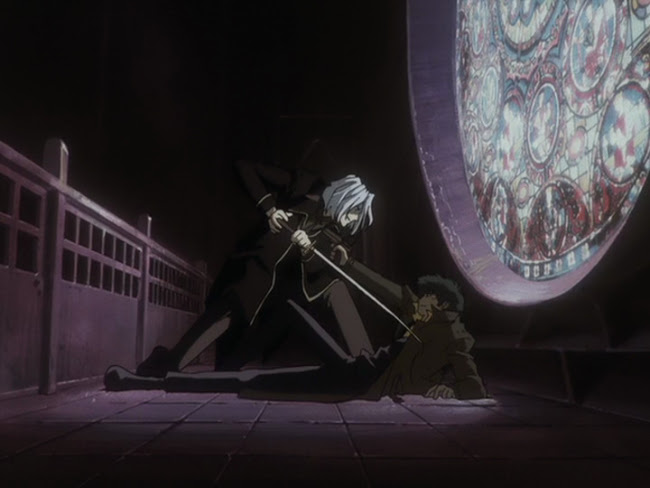 Vicious with his sword against Spike (Koichi Yamadera) with his gun reminds me more of Yojimbo, though. One of the reasons I think the climax of Kurosawa's 1961 film is better than that of A Fistful of Dollars, its Spaghetti Western remake, is that the hero uses a sword to beat the villain with a gun. It's an inversion of the climax of Seven Samurai, it's a celebration of what's good about tradition triumphing over the onslaught of technological innovation that allows the childish and crass to triumph over dignity and experience. The message of "Ballad of Fallen Angels" isn't the opposite of this because the weapons have changed hands. Vicious, like the syndicate he belongs to, uses tradition as a stranglehold to deny the experience Spike has accrued. 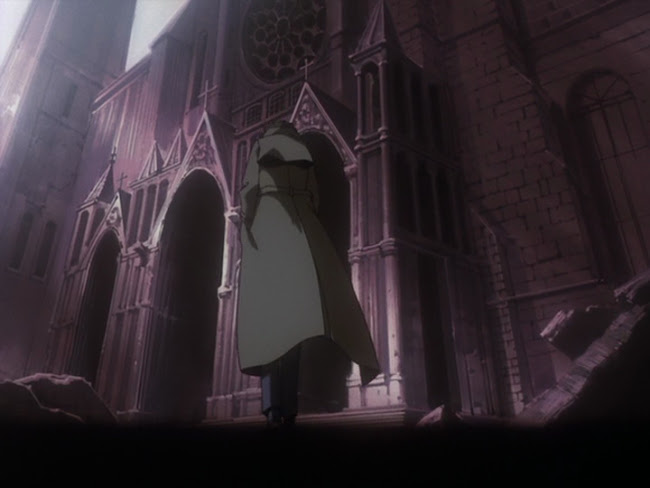 Following from the previous episode, "Gateway Shuffle", which discusses the essential animalistic nature of human beings, it's no surprise that Vicious keeps referring to "beasts", saying Spike looks like a beast, saying the CEO Vicious murders at the beginning of the episode is a "beast who lost his fangs". The episode is filled with ideas and imagery that present a tension between concepts of the divine and concepts of nature. Unlike the usual collage of cultural information on Mars and elsewhere, the central scenes of "Ballad of Fallen Angels" take place in a gothic cathedral where the characters are watching a man singing "Ave Maria". The sense of Eastern and Western traditional iconography and organisation combine to augment the impression of some greater controlling entity whose demand for submission is seductive. A shot even pointedly shows the singer's arm reaching up toward a light. 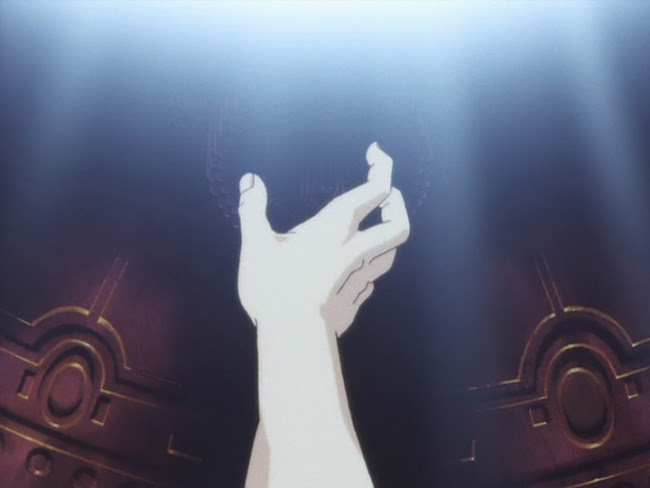 The first interloper in this opera of ideological dominance is Faye (Megumi Hayashibara). Once again, she's all about bondage and the animators have given her breasts a noticeable extra bounciness. 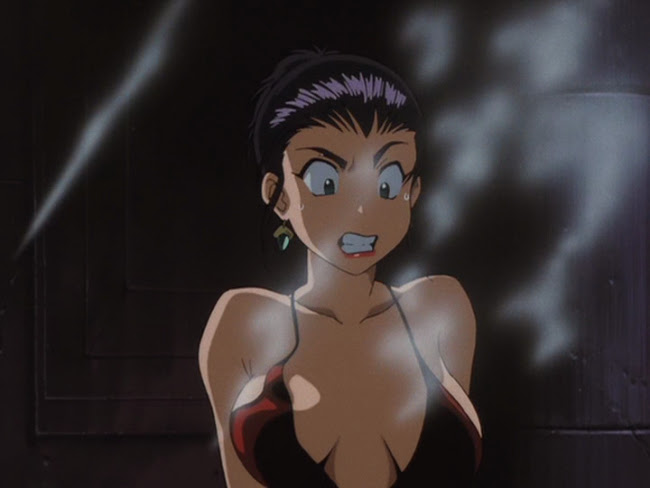 She shamelessly poses as a call girl to get up to Mao's box seat. All of these forms are toys and tools for her to play with or use to get what she wants--and what she wants is money. She wants her bounty. She may well agree with Spike that this is all just a dream though she might not have put it that way. When she's captured, she calls Spike and Jet (Unsho Ishiazuka) for help but she doesn't seem that worried. She's tied up; she's in her element. 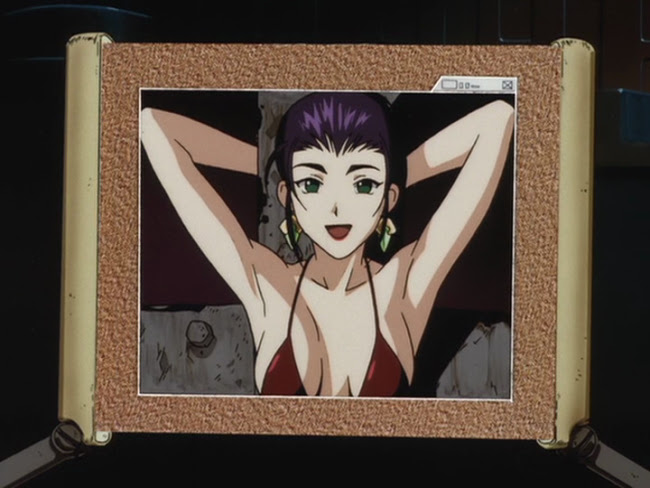 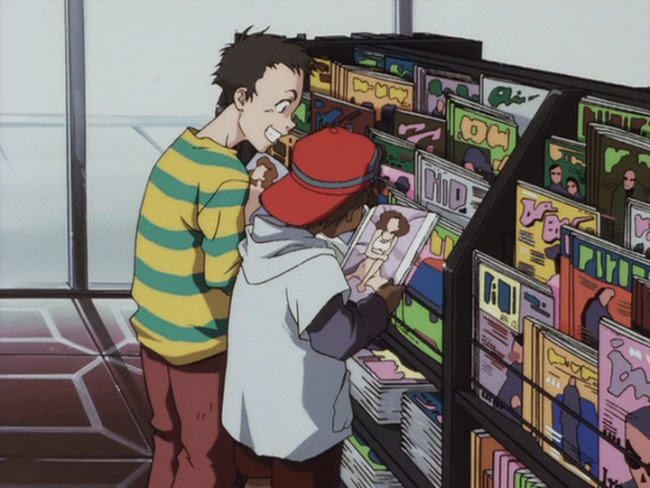 The kids are foiled by Annie (Miyuki Ichijo). I love all kinds of anime but one of the things I love about Cowboy Bebop is not all the women look like the same mannequin with different wigs. It makes Faye's beauty actually mean something when we have an ordinary, very human looking woman like Annie. She's also a part of Spike's past, a much warmer and more pleasant part. 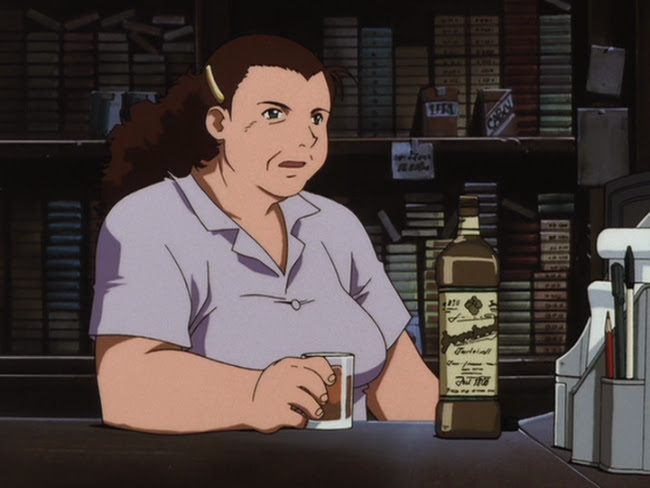 It's quite self-consciously noir-ish, the simultaneous push and pull influence of the past on the protagonist. We get a few more glimpses of Julia (Gara Takashima) in flashback, notably a flashback to Spike recovering from some great injury which is deliberately blended with the present moment, at the end of the episode, where Spike is in some kind of absurd full body bandage. 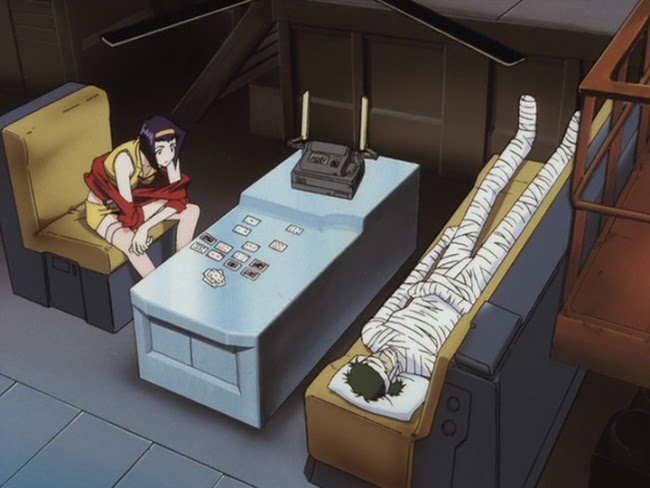 How could he survive that fall from the window of the cathedral? The show seems to be acknowledging it's impossible by putting Spike in that distinctly cartoonish get up. As though to say Spike could survive that because Mickey Mouse could survive that. It keys into the fundamental fetishism of cartoons, especially when Faye is shown to now be sitting with Spike in place of Julia. Instead of this idealised woman of his grim and confining past, Faye has no strong emotional attachment to him, may very well cheat him as she's done already, and flaunts sexuality has a game and tool. His bandages now also put him in a bondage position and aesthetic. Can he and Faye have a relationship defined purely by meeting physical needs? Not quite. She's humming and he forces her to lean in close to hear what he has to say--"Tone deaf." She makes good on the combination of cartoon logic and bondage by walloping him in his helpless position and stalking off. 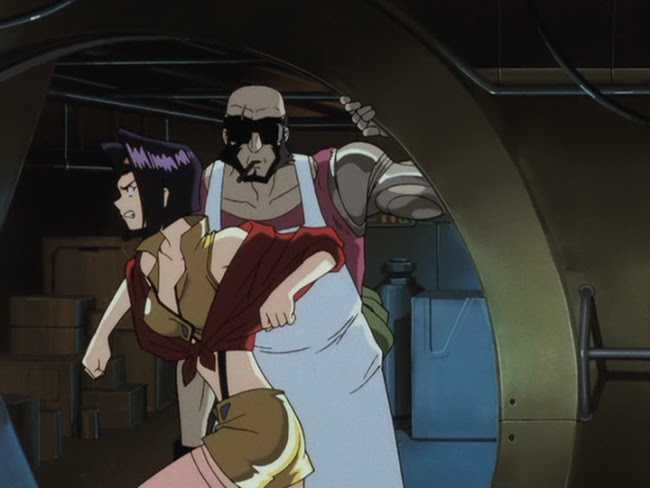 Is this an affirmation of the present state of things or a lingering desire for something higher? Julia, presumably, was not tone deaf. We could take this as a throwaway gag but Cowboy Bebop doesn't treat music lightly.

Posted by Setsuled at 10:38 AM
Email ThisBlogThis!Share to TwitterShare to FacebookShare to Pinterest
Labels: anime, ballad of fallen angels, cowboy bebop, tv show