Another Ominous Colour for Water 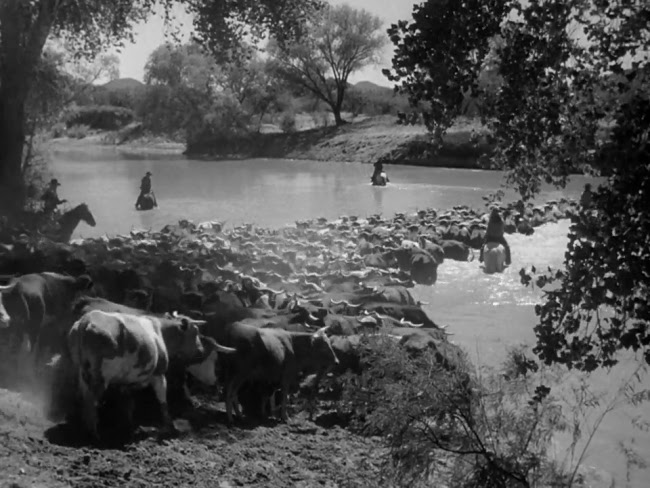 Is conquest necessary for civilisation? Is it an essential human need? 1948's Red River mythologises the expansion of the U.S. but it doesn't sanitise it. In the conflict between pioneering cattle rancher, Thomas Dunson, and his adopted son, Matt Garth, is great character drama that at the same time illustrates broader issues of coexistence in a country that contains such radically different ways of seeing the world. With incredible performances, and keen storytelling from director Howard Hawks, this is one of the greatest Westerns ever made. 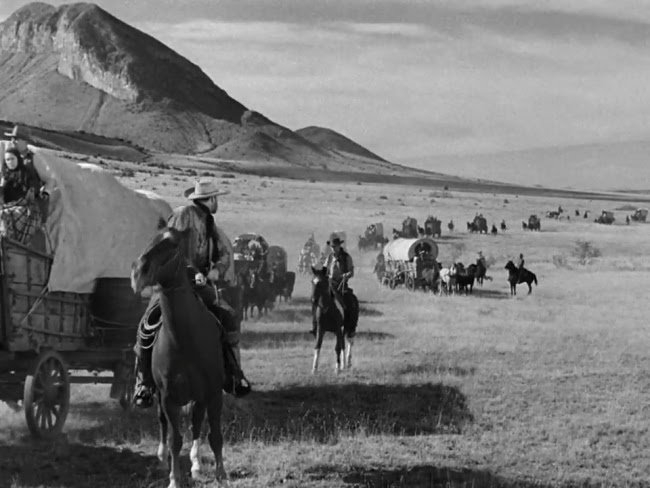 The first shot of a wagon train making its way to California in the mid 19th century establishes the sense of wonder in the endeavour. For the U.S. population in 1948, agriculture and ties to land was a bigger part of the cultural identity so it's not surprising audiences loved this kind of glorious dream of the past. But any revisionism in the movie has nothing to do with hypocrisy. When John Wayne, in one of his iconic roles, breaks off from the wagon train headed to California to stake his own claim in Texas, he encounters a couple of Mexican men who tell him the land already belongs to their employer. "You mean he took it away from whoever was here before. Indians, maybe," says Dunson. "Maybe. So?" one of the men replies. "Well, I'm taking it away from him," says Dunson. 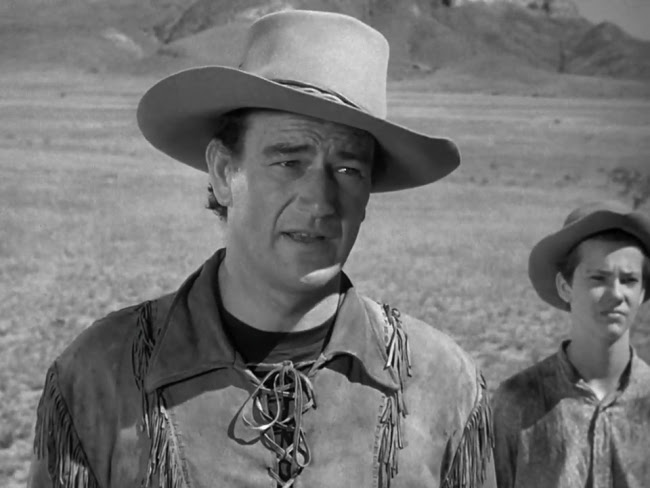 Strained smiles follow before Dunson shoots and kills one of the men as he was drawing his own pistol. Dunson tells the other to go tell his employer what happened. And that, folks, is how the West was won, more or less. Fourteen years pass and Dunson has turned one bull and a cow into cattle numbering in the thousands. He can't sell any beef after the Civil War so, with the same boldness with which he staked his claim initially, he decides he's going to leave his land and move all the cattle north where there's a market. 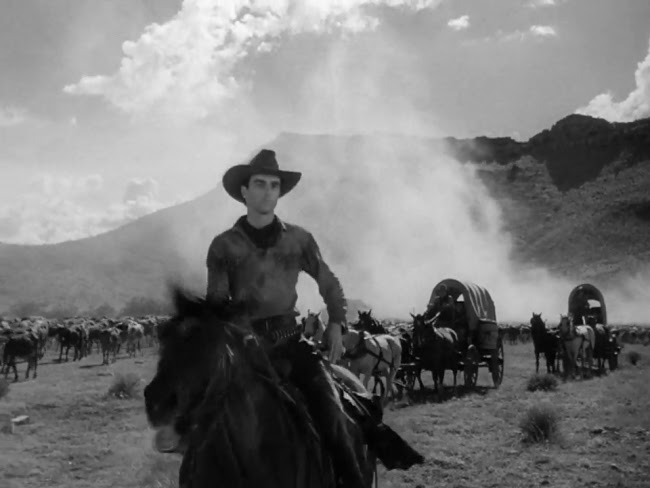 His second in command and essentially adopted son is Matt Garth played by Montgomery Clift in one of those revelatory performances that shows how method actors were shaking up Hollywood in the late 40s and 50s. We first meet Matt as a boy played by another actor (Mickey Kuhn) who has the average stilted delivery of an average 40s supporting player. So when the film cuts to older Matt even his natural reactions in casual conversation are amazing. 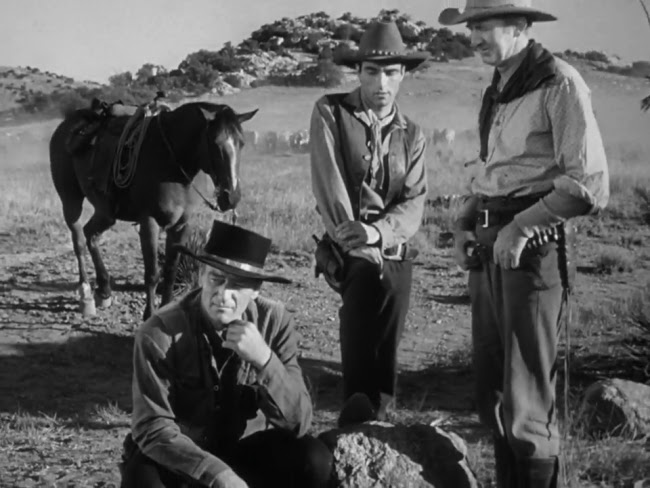 The place Matt occupies in Dunson's heart is complicated and feeds into the essential mythology of the story. When Dunson left that wagon train at the beginning of the film he left behind the woman who loved him, Fen (Coleen Gray). In the film's first scene the two part, she begging to go with him to settle in Texas, he telling her it's too dangerous. She starts talking to him not like an individual woman but like an emissary for womankind. When he says the life he's set out for would be "too much for a woman" she replies, "Too much for a woman? Put your arms around me, Tom. Hold me. Feel me in your arms. Do I feel weak, Tom? I don't, do I? Oh, you'll need me. You'll need a woman. You need what a woman can give you to do what you have to do. Oh, listen to me, Tom, listen with your head and your heart too. The sun only shines half the time, Tom, the other half is night." 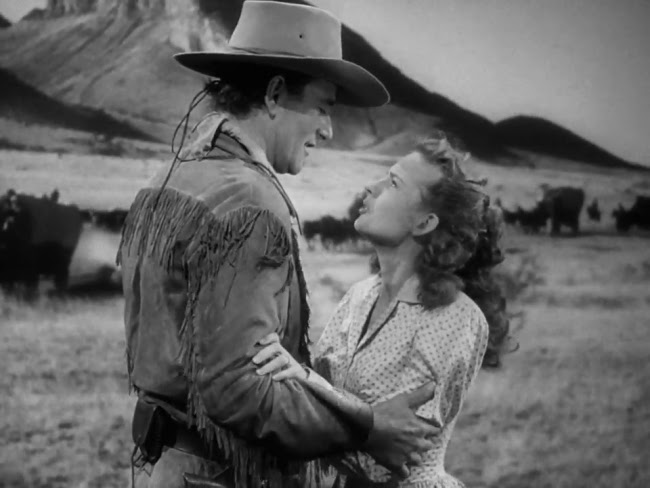 This mirror dichotomy of man/woman, sun/night will be echoed later after Dunson and Matt's relationship ruptures on the journey north. Matt is tied to Fen because Matt is the only survivor of the wagon train at the beginning of the film--he escapes with a single cow after the train is attacked by Indians. That Dunson makes his great herd from his bull mating with Matt's cow emphasises Matt as a symbol for the female half necessary for Genesis which Dunson neglected. 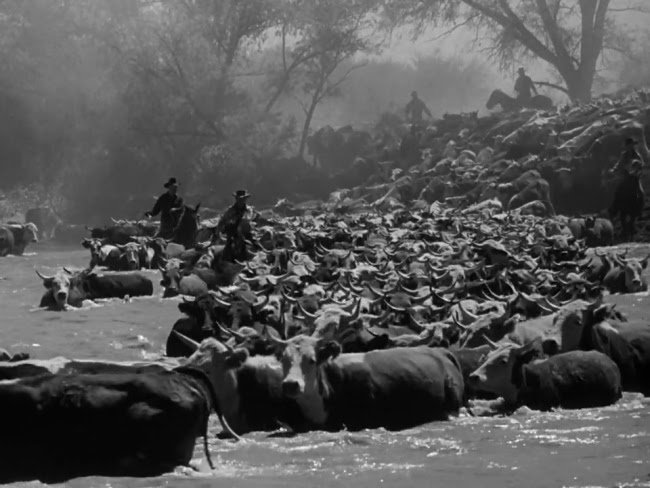 So as the journey north becomes more and more fraught with difficulty, it makes sense the conflict that arises between Dunson and Matt is one between a philosophy of force and a philosophy of compassion. When men want to desert, Dunson's methods of dealing with the deserters become increasingly brutal and Matt has to find gradually more direct ways in countermanding Dunson. 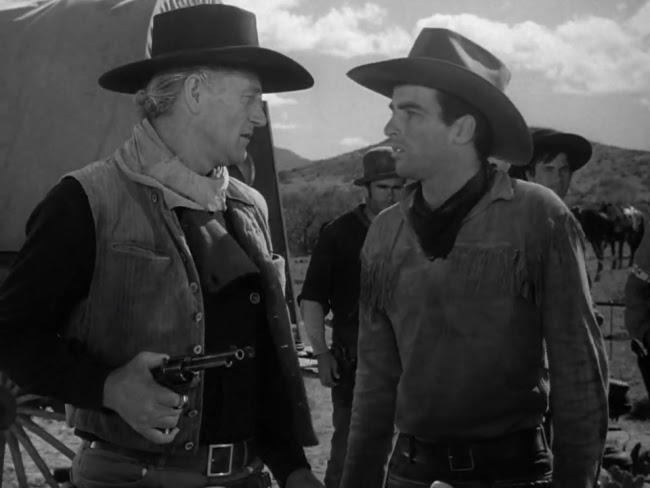 A woman doesn't come back into the film until the final act--an example of the famous "Hawksian Woman", in this case played by Joanne Dru. Her introduction is certainly impressive. When Matt joins her and a group of gamblers and prostitutes in the middle of circled wagons fending off Indian Comanche attackers she starts flirting with him. When she takes an arrow in the shoulder--it seems Dru was actually shot in the shoulder with an arrow, presumably she had padding under her blouse--she doesn't even change her tone of voice while he's focused on shooting. 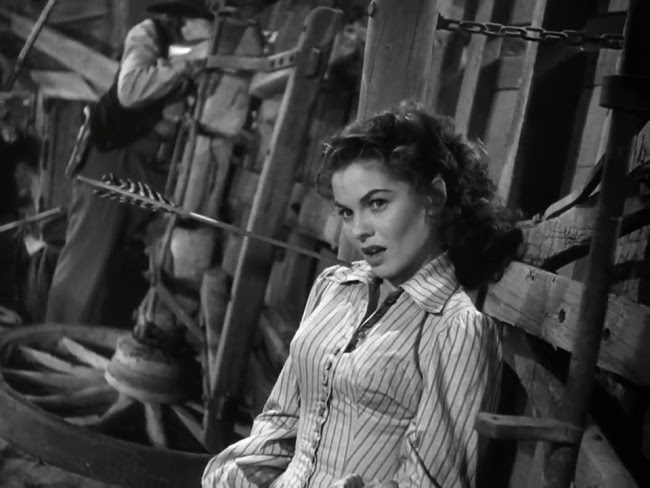 The phallic arrow and her taking it so easily is one of the less direct of several ways that the film implies she's a prostitute. It also implies her independent spirit and ability to make decisions and take actions that don't necessarily suit her immediate physical needs or comfort. It makes sense that a woman with traditionally masculine attributes would potentially bridge the gap in the conflict between Dunson and Matt. But while it's an effective route for the personal conflict of the characters, it's questionable whether it resolves the larger thematic tension which would continue to be fertile ground for Westerns for years to come.